Posted at 08:00h in Reveal by Fernanda Fraga
3 Likes
Click here to fill the form and receive the PDF

The Reveal™ 35C detector is portable and universally compatible, which means it can replace detectors in any existing chest radiography systems including fixed and mobile machines. Reveal™ 35C is also more affordable than other fixed dual-energy subtraction X-ray technologies and can be taken right to a patient’s bedside in an emergency room or intensive care setting.

Read the blog post below for a summary of the article.

Conventional chest radiography is still the most common technique used for the detection of small pulmonary nodules and other chest diseases. It is simple and inexpensive, readily available, portable and uses the least amount of radiation when compared to computed tomography (or CAT) scans. Unfortunately, chest radiography has proven to be inconsistent.

Pulmonary nodules are small round or oval shaped growths in the lung. Countless small pulmonary nodules are discovered each year during chest X-rays or CAT scans, but many go undetected. Although most are noncancerous (benign), some could be potentially dangerous for a patient. There are usually no symptoms associated with pulmonary nodules, and they can be due by infectious causes, disorders, or even be an early sign of lung cancer.

The Reveal™ 35C X-ray detector is KA Imaging’s solution to address the shortfalls of conventional chest radiography. Reveal provides Dual-energy Subtraction X-ray images along with conventional chest radiographs that can help to better detect small pulmonary nodules5. The Reveal detector is portable and universally compatible, which means it can replace detectors in any existing chest radiography systems including fixed and mobile machines. Reveal is also more affordable than other fixed dual-energy subtraction X-ray technologies and can be taken right to a patient’s bed side in an emergency room or intensive care setting. 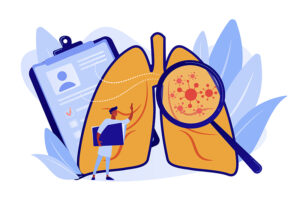 Here are the top 3 problems with conventional radiography, and how Dual Energy can help.

Problem 1: The false negative rate for detection is high

The false negative rate for the detection of pulmonary nodules has been reported to be anywhere within the range of 19 to 72%3. Interpreting X-ray images or even CAT scans can also be a lengthy and difficult process for radiologists. This is due to not only the quality of the technology used, but the irregularity shown in the nodules or small masses themselves.

Reveal is a dual-energy detector and has a unique patented technology: it is capable of simultaneously capturing dual-energy subtraction images and very high DQE digital chest radiography images6,7. The Reveal detector provides conventional, and separate bone and soft tissue images with a single X-ray shot thus identifying hidden nodules that may be obscured in the tricky bony apical regions or the retrocardiac areas of the chest.

Problem 2: Pulmonary nodules can be very small and dense

Dual-energy subtraction X-ray imaging has been reported to increase sensitivity up to 50% to aid in early diagnosis and monitoring5. Reveal 35C provides clear high-quality images that enable bone and soft-tissue differentiation. Three different images give radiologists options and comparisons to aid in diagnosis as well as identifying calcified from non-calcified nodules.

Problem 3: Bones and internal structures can obscure these small growths

Detecting lung nodules is further complicated by the structures obscuring them from view, such as the ribs, clavicles, mediastinum, and pulmonary vessels. 82-95% of lung cancers missed by radiologists were partly obscured by overlying bones in one study3.

Reveal is a dual-energy detector and has a unique patented technology. Its single 120kVp exposure generates three separate X-ray images. Conventional chest radiography routinely ignores the useful information encoded in the regular energy spectrum of the transmitted photons. Reveal can obtain this information by performing spectral decomposition of the X-ray beam. This additional spectral energy information enables selective removal of anatomical background, enhancing detectability of anatomies of interest. With one shot, Reveal provides a high-quality chest radiograph , a bone-subtracted image, and a tissue-subtracted image.