07 Mar From Theory to Practice – the Culture of Innovation

A University of Waterloo Start “Invaluable” for KA Imaging

It all started with a handshake.

“We shook on it, and that’s how the game began,” said Dr. Karim S. Karim, CTO and co-founder of KA Imaging, about his partnership with Amol Karnick (CEO). “It was just a little agreement between the two of us.”

Dr. Karim credits the University of Waterloo with making the introduction to Karnick, and for developing a culture that values the relationships and collaborations with students necessary to develop innovative technologies for commercialization.

At the time, Karnick was an executive in residence at Communitech, a community that helps companies in the Waterloo region to start, grow and succeed. After travelling overseas, working extensively on X-ray technologies for more than 20 years, and learning from different healthcare systems, Karim wanted to start a new company.

“Karim had the technology, I had the business experience,” said Karnick. Karnick has been an executive in the imaging field for over 20 years. After being in the healthcare market for so long, it was easy for him to spot an opportunity.

“Accessibility has always been an issue globally. I knew we could make a difference,” he said.

This is how the two Waterloo graduates began KA Imaging in 2015, intending to make a difference in the world.

They also invited engineer Sina Ghanbarzadeh to start the company with them. Sina was part of the nascent Silicon Thin-film Applied Research (STAR) group at Waterloo with Professor Karim, where early research on the X-ray technologies that would later originate KA Imaging started. 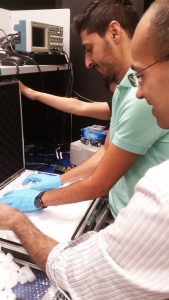 “Of course, I had to do my part, and Amol had to do his part, that’s why KA Imaging is where it is today, but the university was the foundation. The university made the introductions and helped us get everything up and running … anytime we need something – we ask them,” said Dr. Karim.

This involvement, the ongoing work and the value placed on innovation and ideas, has continued. KA Imaging consistently hires promising students and professionals for both permanent and co-op placements from various schools and engages the university at every opportunity.

“That’s another piece of the university that just carries on the culture,” said Dr. Karim. “I can tell you, Sina (Ghanbarzadeh), Sebastian (Maurino), and Chris Scott were all my students. Some (KA Imaging employees) also worked with colleagues of mine.”

Co-founder Ghanbarzadeh, who helped transform KA Imaging and dedicated his studies to the Reveal™ 35C detector, died from lymphoma in February 2021.

Dr. Chris Scott, a Technical Lead at KA Imaging and University of Waterloo graduate, completed his PhD in electrical and computer engineering under the supervision of Dr. Karim. Scott said quite a few employees came from Dr. Karim’s lab, and they shaped the early part of the company. Different teams focus on different projects and products at KA Imaging, but almost all of the work originated at the University of Waterloo. 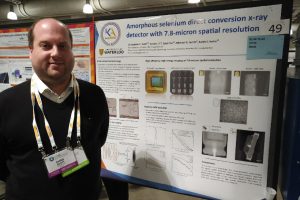 “Everything started at KA (Imaging) was a research project in Karim’s lab. There’s a lot of innovation going on in that lab, and the only way to get it out there is to get investment, create a company and actually build real things,” said Scott. And that is what they did.

Scott said that Dr. Karim changed his outlook on a lot of things, because Scott thinks he tends to be more pessimistic.

“Some days I wonder how we pulled this off,” he said. “I don’t think we could have, without his (Dr. Karim’s) vision and optimism.”

Sebastian Maurino, Imaging Physicist and Engineer also came to the company by way of Dr. Karim’s lab. Although his work took him in a few different directions, he said that he was attracted to the idea of medical applications and always liked imaging.

His Master’s thesis on the design and optimization of a stacked three-layer X-ray detector was focused on the theoretical side of it, and when he finished school, he thought that was it. But his research work and dedication to dual energy allowed him to truly see the Reveal 35C project from conception to formation.

“Dr. Karim had obviously seen some of the same results I had seen on the triple-layer project, and he wanted to see where it would go,” said Maurino.

The company soon switched their focus somewhat from original projects to this new one, which Maurino explained was “fantastic” for him.

“It’s very rare that one gets to see the research project from their graduate work get attention from a company that actually wants to build it and take it to the market,” said Maurino. “Research ends three ways – you either prove that it doesn’t work, you prove that it works but it goes nowhere, or it ends up being a product.”

Luckily for Maurino, Reveal 35C, the world’s first portable, triple-layer dual-energy X-ray detector has not only received FDA 510(k) clearance and a Health Canada Medical Device Licence – but it is also currently being used in two clinical trails with promising early results.

The team installs the Reveal 35C detector for the first clinical trial at Grand River Hospital.

“For me, this has been an incredibly satisfying learning opportunity to get to see this product from the beginning … from us sitting around a table, trying to figure out the problem with dual energy, to shipping out the first product,” said Maurino.

Maurino is also excited to see what the next few years will bring.

“The value we have as a company is being nimble, and Karim very much understands that. Being nimble means being able to change … this is something I have grown to value in his teachings,” Maurino said. “And to have a city and an institution that appreciates innovation, that’s incredible. That’s a place I want to be.”

For the future, Maurino expects they will continue to innovate and continue to make a difference.

“I always say that we’re called KA Imaging, not KA X-ray, so I can only imagine that the aspirations are much broader than that. To continue to grow where we can make a difference, that’s what matters,” he said.