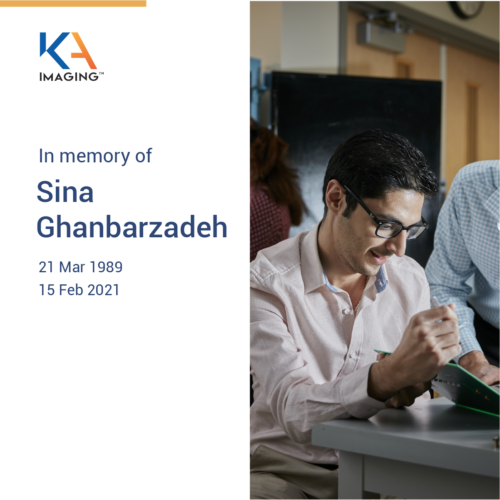 It is with great sorrow and sadness that we report that our co-founder Sina Ghanbarzadeh passed away yesterday (Monday, Feb 15 2021). Sina was battling lymphoma for over a year. He did not give up the fight and stood strong as long as he could, his mental fortitude was strong and willing.

It was ten years ago when Sina Ghanbarzadeh arrived in Canada for a Master at the University of Waterloo, aged 22. Sina came to Canada in search of a better future. Sina was part of the nascent Silicon Thin-film Applied Research (STAR) group at Waterloo with Professor Karim, where early research on the X-ray technologies that would later originate KA Imaging started. Sina was unique in that, with only a research concept, he took the leap (along with others from the STAR group) to develop and pursue an idea to see it become reality.

Alongside Karim S Karim and Amol Karnick, Sina Ghanbarzadeh helped found KA Imaging in 2015. His heart and soul were committed to the development of the Reveal detector, known for its breakthrough technology. Sina helped transform KA Imaging from a small group of three founders a few years ago to a vibrant company producing one of the most innovative X-ray solutions in the world, one that Sina was instrumental in realizing. His dedication and commitment to ensuring that KA delivered a product that both, met customer needs and had exacting quality, drove the rest of the team. Beyond Reveal, Sina influenced all products at KA Imaging – he had even done some of the early work on selenium technology in the STAR group and contributed to the development of inCiTe and BrillianSe. Sina was relentless, and through his hard work, not only do we have products but a company with a strong foundation. While dedicating himself to KA Imaging, Sina also remained committed to his PhD degree at the University of Waterloo, diligently going through all the milestones. He was about to finish his thesis when he found out about the lymphoma.  The cancer, unfortunately, advanced beyond treatment.

Sina was an engineer full of intelligence, drive, passion, and incredible work ethic. Sina Ghanbarzadeh embodied the essence of an engineer, not only delighting in discovery of the new but in pursuing transformation. He was a believer in the power of people to transform their environment with their ingenuity and passion.  KA Imaging will not be the same without his calmness and smile as he handled any situation with ease and faced adversity with class and poise.

Sina was both a close friend and professional colleague and we are personally devastated that he is gone. Sina was extraordinary – he will be missed, but never forgotten.  People come and go in our lives, but only a few make an impact.  For us, Sina was one of those people who made a lasting impression. There will be those who never had the good fortune to meet Sina, however, they will know who he is, since his contribution will be everlasting.

Our love and compassion go out to Sina’s family and Saeedeh Ghaffari, engineer at KA Imaging, and Sina’s spouse.

Photo: Courtesy from the University of Waterloo