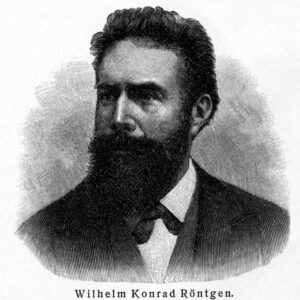 In 1895, German physicist Wilhelm Röntgen was studying electron beams when he made an accidental discovery4. He noticed that when he covered a Crookes tube (an early vacuum tube that produces electron beams) with cardboard, a faint glow came from a screen painted with fluorescent material that was some distance away, further than the electron beam could travel. Next, he realized that objects placed between the tube and the screen appeared transparent, although some more than others, depending on the material. He deduced that invisible rays other than the electron beam were coming from the tube and named them X-rays, due to their unknown nature. He was able to demonstrate his discovery to the world through the world’s first X-ray image that he took of his wife’s hand on a photographic plate that showed the bone structure within.

After significant advancements, at a time where people were becoming more excited about advancing technology, X-rays became a huge fad. Machines were used in shoe stores to check sizing from the 1920s to 1960s, and a hand-held toy was even made so children could take their own images at home. The dangers of radiation soon became evident after the use of nuclear bombs in World War II and exposure to X-rays was restricted to certain controlled applications.

We understand now that X-rays are a type of radiation that can pass through the human body, and the rays are invisible and intangible. As they pass through an object, their energy is absorbed at different rates by different components within the object due to different atomic numbers. A detector on the other side of an object or body can transform these X-rays into an image to view and process.

Objects within a human body such as bones require higher energy X-rays to penetrate, which is why they appear clearly in the images. Softer tissue appears darker, as X-rays travel more easily through less dense materials with low atomic numbers like fat or muscle and air-filled cavities such as the lungs.

The main application of X-ray imaging has continued to be in the medical field, though X-ray imaging is also used for industrial, scientific and veterinary purposes. Röntgen, along with his colleagues, realized the importance of his discovery immediately and proceeded to study and experiment with enthusiasm.

We know a great deal more about X-rays now due to their persistence and have been able to integrate the use of X-rays into diagnostic procedures and medical care.

X-ray imaging is a cost-effective primary triaging and diagnostic tool for medical practitioners and helps to provide efficient care to patients presenting with illness or injury. It is a valued tool for a wide variety of examinations like diagnosing lung diseases or monitoring recovery, detecting bone fractures, supporting medical treatments, and guiding personnel as they insert devices into a patient’s body, or even treatment planning for cancer treatment.

Of course, there have always been some risks, but these are much less threatening in modern times. X-ray imaging uses ionizing radiation, which potentially has enough energy to cause damage to DNA. There is a small chance that a person may develop cancer later in life, according to the FDA2, or have tissue damage causing cataracts, skin reddening or hair loss. These side-effects are extremely rare and depend on other variables and amount of radiation exposure.

The potential benefits of using X-ray imaging provide balance to these risks, and steps are taken to maintain the safest environment for patients and practitioners. Special care should be provided for children, pregnant women and those who are known to be more sensitive to radiation.

Moving forward into the future

Areas of focus moving forward continue to be reducing radiation dose, improving image resolution, and enhancing materials and methods. Emerging companies like KA Imaging have taken strides in these areas and are producing new technology to support medical image quality and design by leveraging all parts of the X-ray spectrum. Reveal™ 35C, for example, brings new opportunities for portable, high-quality imaging without motion artifacts, capable of distinguishing between bone and soft tissue in one single shot, and improvements in X-ray dose by lowered exposure to the patient.